I am Free to Be Myself 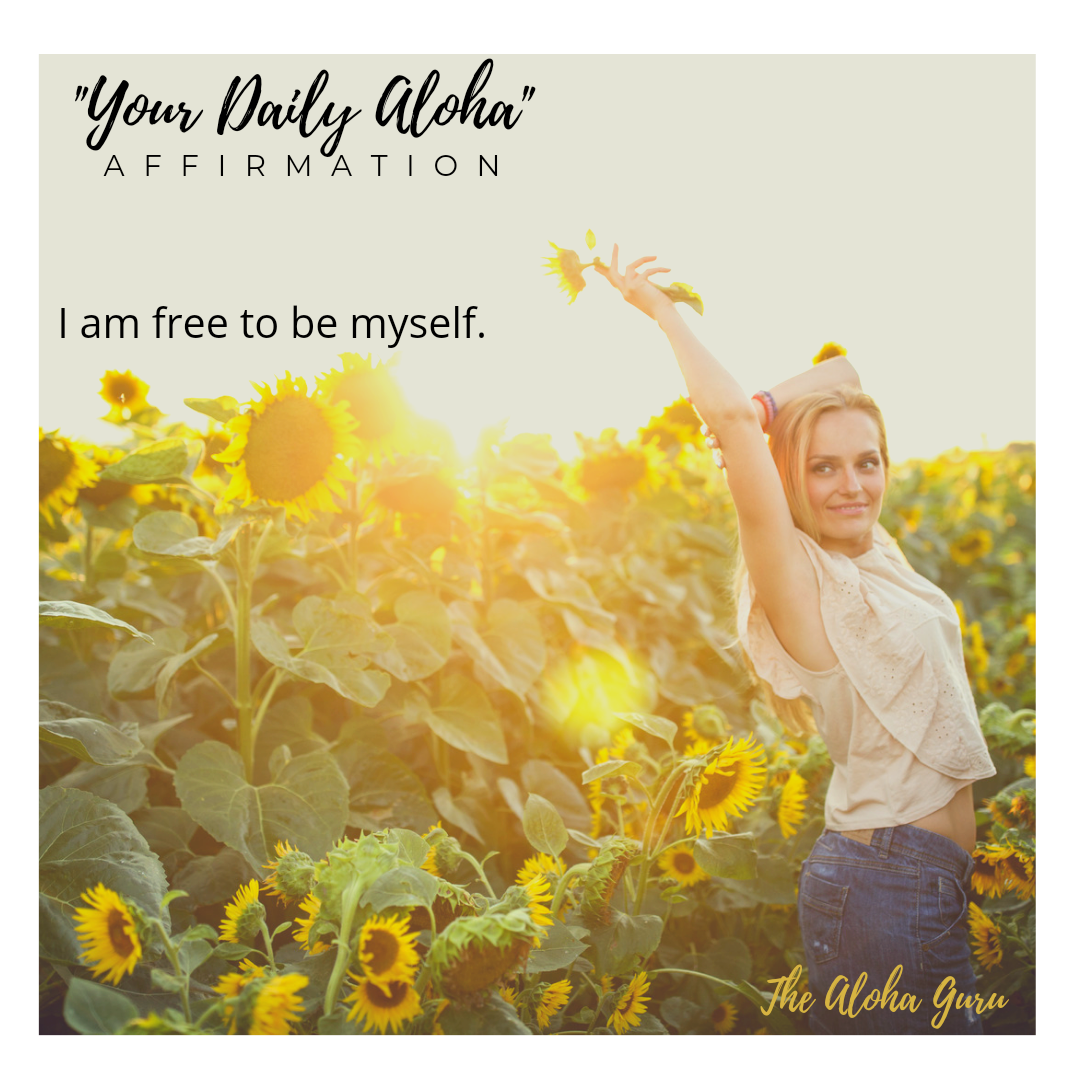 "Don't dilute yourself for any person or any reason... you are enough... be unapologetically you." - Steve Maraboli

As children, how we are raised, how we grow up, and how we look at ourselves is largely dependent on our parents and the people closest to us. Our upbringing and the environment we are raised in strongly influence how we think and feel and what we say and do. My early childhood laid the foundation for low self-worth and self-esteem for decades to come.

Growing up, I was strongly discouraged from sharing my emotions. Because my mother grew up in poverty in the Philippine Islands, she felt everything my parents provided us in America was enough for us to be grateful. So, what would we have to complain about? Why would we ever be upset? What could we possibly be mad or sad about? The only emotions we were expected to feel were happiness and gratitude.

My mother grew up without running water, electricity, TV, education, a phone, and a car.  Everything she ate was mostly from the land that surrounded her home. For fruit, she would climb the banana tree outside their house or pick papaya or mango from their garden. For a meal, she would fish in the sea close to her home.  For dinner, she would cut the heads off the chickens she helped raise. They even had water buffalo on their property.  She knew what "organic" and "farm-go-table" meant long before those terms were used in America.   Here, she was astonished that one aisle at the grocery store alone was dedicated to cereal. All we had to do was get ourselves to the grocery store and pick out our food in a box or plastic packaging.  We could even drive through the McDonald's and get a hot and "Happy Meal."  How easy was that?

Life in America was so much more convenient. Here, all we had to do was drag our dirty clothes in garbage bags to the laundromat on a Saturday morning, slide coins into the slots of washing and dryers, and our laundry would be done within hours. Back in her country, my mother would have to wash her clothes in the river by beating them with rocks. I know this because I’ve heard this story over and over again.

Because of my mother's life in poverty, I learned gratitude early in my life. It was ingrained in us from a very young age.  My mother refused to raise us like "spoiled Americans," she would say. So, of course I couldn't ask for whatever I wanted whenever I wanted. In our home, we didn't ever ask or tell our parents what to do or what to buy us.  We learned to be grateful for whatever we got.

As a result of hearing my mother's stories of struggle, I also felt guilty my entire childhood. I immediately felt guilty for having more and better than she did.  How could I possibly be so happy when my mother had so little?  She grew up sleeping on floors while I had a white canopy bed with a ruffled, princess or flower-patterned bedspread.  Life for her must have been hard and difficult, especially during monsoon season, when her family feared to lose their home.

When you carry guilt the way I did, you learn to shut down your emotions. She was right, I thought. Who was I to complain or feel sad about anything when I always had food on my plate, clothes on my back, a soft, warm bed to sleep in, and a strong, stable roof over my head?  Even though my parents worked in a factory, they always made sure we had the bare necessities, and many times, even more!  We always had presents under the Christmas tree. We always had presents for our birthdays, and we even had the traditional Carvel ice cream cake to blow out our candles.  My parents really did everything they could to keep us healthy, safe, and cared for.

But, growing up as a teen in America is no easy feat. As teens, more than anything, we want to fit in. We want to belong. And, we want to be accepted. Belonging and fitting in required socializing with others, but I was not allowed. My mother was strict and she didn’t trust us going to strangers’ homes. She had enough bad experiences with people who mistreated her since arriving in America and the TV crime shows she watched also didn't help. She also was brainwashed into thinking that just because other kids did drugs that I would simply follow suit. Therefore, she didn’t want me out of sight. This is why I was so studious and academic. I had nothing else to do besides my chores, and, eventually work a part-time job.

Our teenage years can be the most exciting times in our youth and the hardest at the same time. It can be a rollercoaster ride of emotions. But, since I was not allowed to show any emotions, I swallowed them. In fact, I swallowed them with every bite of Devil Dog, Chips Ahoy cookie, and a slice of Sara Lee German chocolate cake that waited for me after school. My after school snack time felt like the only peace I could find in my world. And, I savored every bite. In fact, after getting off the school bus every afternoon, I would pray that no one would be home. That 30 minutes to an hour of freedom was all I had to look forward to. It was the only peace and quiet time I had to think, feel, and be myself. It was just me and the tasty morsel melting in my mouth.

To my mother, teenage problems were not real problems. They weren’t life-or-death problems. They weren’t starving-or-eating kinds of problems. So, I learned to shut up and shut down. I didn’t have anyone I could talk to back then. Talking to my mother was out of the question as she didn’t believe there was anything worth complaining about. I was also discouraged from going outside of our family. Back then, anything that went on in your home stayed in your home. So, I couldn’t talk about fitting in or adjusting to teenage life with anyone.

My early teenage years were when my struggles with self-worth, self-love, and self-esteem escalated. I started to see that if my problems were not valid, my feelings were also not valid. And, vice-versa. Between my mother’s verbal abuse, my strict upbringing, my dad's drinking, my parents’ constant fighting, and having no one to talk to, my self-worth really began to deteriorate. For me, becoming a teenager was the straw that broke the camel’s back. If my feelings didn’t matter, then, surely, I didn’t matter. It was the first time I thought about suicide.

Suicidal thoughts were a secret I kept to myself for the longest time. I hid them for so long that even I forgot about them until decades later. I must have buried them so deep that even I couldn’t remember how far down in the hole they lay.  All I remember now is how my head literally felt like it was going to explode.  I also remember thinking about how I would pull it off. I worried about failing and it making my life worse. Eventually, I gave up on the idea because I didn't want to leave my younger brothers behind.  I especially didn't want to chance how my death would affect my mother, which then could make it even more difficult for them to live with her.  And, ultimately, I believed my life had to be worth living. It just had to be.  I had to make it so.  Someday, I thought.

So, every day I fought to keep going. I wouldn’t give up. I wouldn’t let my story end like that. Somehow, I knew I was destined for more. It would just take me years to figure it out.

Putting myself last kept me from truly living the life I wanted. It kept me from being more social. It seeped into my choices in men and the quality of my relationships, and it held me back from pursuing my full potential professionally. I didn't become a lawyer or a doctor.  I didn't marry a lawyer or a doctor.  I never followed the path to that bustling career with a six-figure salary, four-bedroom house, convertible BMW in the driveway, and annual cruises in the Caribbean.  In fact everything anyone expected of me, I shattered.  Instead, I ran. I  kept chasing the youth I felt I lost only to realize the long and hard way that it was an impossible feat.  It took me decades to settle down instead.  In fact, I didn’t get married until I was 45. And, I never had children.

I took as much time as I could to learn how to have fun,  but it wasn’t easy being in pain for so long, hiding this secret of suicide and low self-esteem.  I was curious about the world, so I traveled. In doing so, I fought hard to become brave and gain confidence. It was a long process because I wouldn’t talk to anyone about it. I just kept putting one foot in front of the other toward courage and finding my true self by myself.

While it took me decades to face the music and realize I needed to work on loving myself, I never gave up. I was always a work in progress. By my late thirties, I had hit my wall. It was time to take everything I learned so far and put it into action. I decided to start life all over again in California, where I would be forced to become the woman I always wanted to be. Therefore, I spent the last eight years of my new life in San Diego working harder than ever to transform into the braver, stronger, and more confident woman I am today.

Today, I speak up, stand up, and step forward in courage and confidence. While I may still have my moments - moments when I am tested, I work hard to learn from the lessons of yesterday. Now, I am unapologetically me. I am good enough. My feelings do matter. I matter. And, my dreams matter.

Be free to be yourself, my Pineapple. It will lead you to the life you deserve.

Live, Love, and Lead with Aloha.