I Have the Courage to Get Through This 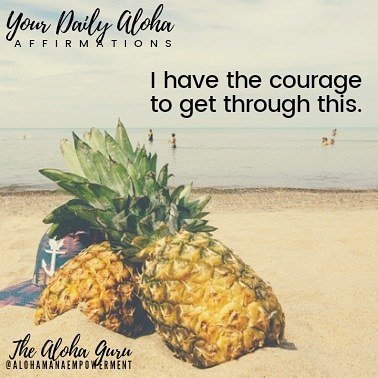 Even when you don’t feel brave, even when you have fear and doubt, it is OK to project courage. In fact, projecting courage is simply practicing courage. While you might feel like you’re being fake or like you’re only pretending to be brave when really you’re not, that’s OK! Why?

Just like athletes training to become Olympians someday. They start projecting, practicing, thinking, preparing, eating and training like Olympians as best as they can until one day they’re standing on that platform, representing their country and sport with medals hanging around their necks.

That’s the whole point of saying a positive affirmation – saying it until you believe it. Believing it until you achieve it! Then, maintaining that belief to sustain the outcome. I believe you can have courage even if it means you have to project, pretend, and practice it first. Keep practicing courage until it comes more naturally and it will help you handle and overcome any obstacle that comes your way.

Love yourself enough to try, my Pineapple!